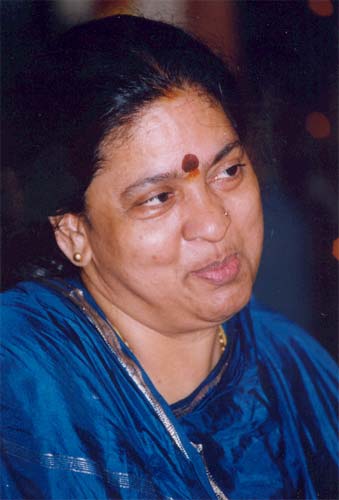 Amma's Guru is Sadguru Sri Sadasiva Brahmendrar. The name Yoganandamayi was conferred by her Guru. Amma is more a mother than a Guru. Amma never consider herself as Guru. The spontaneous state of bliss of Amma, which we observe during satsang sessions, is a live example to experience the Bhakthi Yoga.

Amma has been blessed with this natural state of Bhakti Yoga since 1991. The methods and techniques for imparting is unique in the sense even Amma herself does not know in advance. As the satsang session commences, the inner prompting Amma gets, would decide the day''s program. There is no theory, all are practical sessions. One has to sit in a thoughtless state, to the extent possible. Rest happens automatically as described elsewhere in this website.

Amma has given a detailed description of her practical experiences when she attains the state of bliss. We have made an attempt to provide the same in this site under Amma's speeches. To know the full details of Amma's life, the publication by ashram, titled as Biography of Amma can be referred.