Of late, place, date and time of Amma's satsang sessions are predictable, but certainly not the contents or sequence of the program. Understandably, during prior times, we would not have been taken into surprise, if satsang is fixed amidst a busy working day evenings. In terms of place or venue where the program was to be conducted, it was as interesting as knowing the sex of a child to be born (don't try for scanning since Amma does not like short cuts), in the sense that Amma visited many temples in and around Chennai and blessed the devotees. Such visit includes some prominent places in Chennai like Thiruvotriyur, Vengeesware Temple (Vadapalani), Avadi, etc. We do have quite a lot photographs taken on such occasions.

Till couple of years before, Amma preferred to hold satsang in the residence of devotees who are in close circle. As indicated, the uniqueness of Amma's satsang is ever freshness and as lively as unpredictable. There is no stop clock in terms of timing and satsang would go on even till midnight, though not always. This is only to indicate Amma's interest and involvement in sharing what she possess in the form of divinity, as ordained by the almighty. 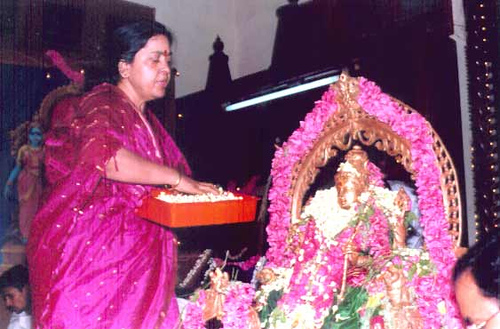 To understand the evolving nature of Amma's bhakti yoga, we have put the methods of Amma's satsang under three stages.

Amma visited all temples in Chennai and conducted bhajans with no defined orchestra. While crossing the streets she used to bless people from all walks of life. (Can be elaborated based on inputs).

Satsang sessions were predominantly a one to one experience of the energy that is flowing from Amma's hands, fingers, feets, head etc. Like a magnetic pull, even at a distance, one could feel such energy flow emanating from Amma, just by stretching hands forward. This would gradually make one forgetting the self and loosing himself into the bhakthi yoga. After some time, on waking up, one realizes that he remembers nothing as to what happened after he stood before Amma. The impact of such experiences cannot be adequately explained in words. One feels that he is born fresh, like a just blossomed flower. Unlike ever before, eyes would sparkle and unbelievably, no scorns of tensions and stress, which was eating the man or woman all the day.

The concept behind such fusing of man with the energy level is hidden in Bhakthi yoga. Whenever Amma listens to divine chantings or music which moves a soul, spontaneously, she goes into a different state, where, we imagine, there is no body consciousness or individual identity. On many occasions Amma used to dance using the leaves of neam tree, we have observed her face becoming unusually bright and eyes glittering with purity. On such occasions, those who are pure like a child and whose thoughts have not been polluted with motives, have immensely benefited by such energy flow and blessings of Amma.

Currently, satsang sessions are mostly structured like chanting of Sri Lalitha Sahasramana, (which may have in between explanations on certain texts and meanings) with a short speech of Amma. This is followed by Arati and Prasad distribution.

Amma puts in her own words that as the soul evolves into greater heights with the grace of Godess Sri Rajarajeswari, even when scripts are chanted in the presence of such saints, the entire atmosphere gets charged and the energy flow occurs across all people present there. Hence, really there is no need to give one to one experiences when the environment is filled with divinity. This requires no proof, except for devotees own experiences where one could see some devotee getting into deep meditation or some one automatically performing mudras and poses of yoga, about which no body was taught or aware before.